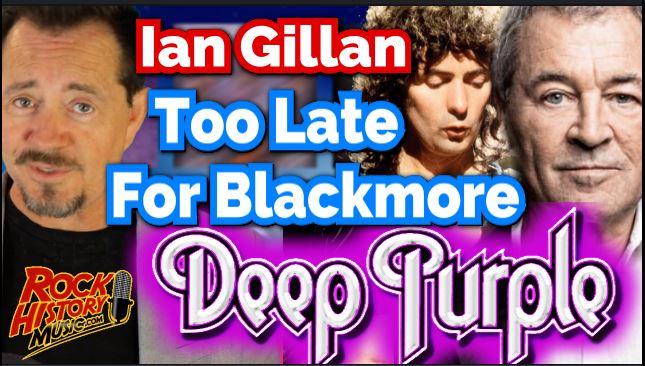 Deep Purple’s lead singer Ian Gillan was interviewed by Italy’s Radio Rock FM 106.6 where he talked about the chance or no chance of Ritchie Blackmore rejoining the group for one show, one song or anything.

He told the radio station, “Let me give you an example. Say you were divorced, say you got divorced, and there was acrimony and difficulty. And lots of relatives and children were affected, and life went on. Then you got married again. And then someone says, ‘Oh, we want you to get together with your old wife, and your new wife, all together, and we’re gonna have a wonderful time.’ Can you imagine how difficult that is in human terms? Now, I understand that we’re professionals and we have a kind of responsibility, but, to be honest, we have never, ever considered the commercial aspects or the fans’ aspects or any of those things when we make decisions, because what we always do is what is most natural and follow our passion and hope that the audience will like it.”

We have said all along that it’s like going on a road trip with your ex-wife. Actually years ago when I interviewed Rik Emmett of Triumph fame that’s exactly how he put it, “How many vacations do you take with your ex-wife?” Of course he did reunite with his ex-bandmates after that for some festivals.

Gillan went on, “Everyone knows the history, Purple was on the downslope when Ritchie left, and with Steve [Morse, Blackmore’s replacement], we got back on the upslope again. So it would be, in the greatest scheme of things, impossible to do that. And I think it’s gonna be increasingly difficult as the years go by, because no one has much interest in that sort of thing.”

“We have no great passion or dislike for Ritchie — we’re actually exchanging communications and ideas through our offices, so there’s no nasty feelings left, I don’t think, in that respect. But I think it’s too late. We’re thinking about the end now. And the other thing is it would just open the damn gates and all this whole damn thing would start all over again just when we put it to bed.”

Gillan also said that everyone in the band would think of a Blackmore reunion as a bad idea and everyone should just let it rest. Wish Ritchie well and move on since things are moving so well now. Interestingly Gillan says he doesn’t hear it from a lot of fans adding that the ones who want the reunion are not the ones who come out to the shows.

“We’re so close to the end now — within a year or two, three, four… I don’t know. Who knows? But it’s close. And I think probably, as Ian Paice said, we’re happy now. It stopped raining. The sun’s shining. Let’s enjoy it.”

Ritchie Blackmore was a founding member of Deep Purple going back to the late 60’s. He left in the mid seventies only to return in the mid-eighties and was gone by the mid 90’s. Steve Morse has been their lead guitarists for many years now.

Go to http://deeppurple.com for concert dates – by John Beaudin