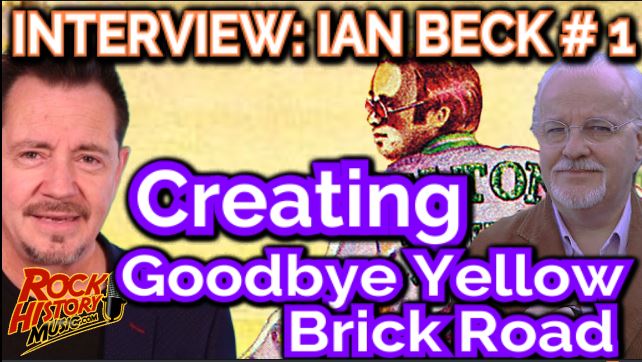 It was a pleasure to finally talk to the man that created the Iconic album cover for Elton John’s “Goodbye Yellow Brick Road.” Ian Beck has had a long fruitful career as both an illustrator and author but, in the end, he may be best known for working with Elton. Here is part one of our conversation where Ian talks about getting that gig.

It was released On October 5, 1973. It was the first of two double studio albums for Elton – the other was “Blue Moves” from 1976. It’s arguable Elton’s best album it’s also his biggest selling with sales of 8 million just in the U.S. And over 30 million worldwide. It’s the one with the Top 10 hits “Saturday Night’s Alright for Fighting,” the title tune and the #1 song, “Bennie and the Jets,”“Candle in the Wind.” and the ultimate one-two punch to start an album “Funeral For a Friend/Love Lies Bleeding.”

The graphics on the project just added to it’s send of nostalgia, mystery and discovery. David Larkham, Michael Ross and David Scutt did the inside cover illustrations but the man who delivered one of the most iconic covers of all time was Ian Beck and he’s our special guest. (Clip 1)

The album also featured the classic version of the Elton John band with guitarist Davey Johnstone and drummer Nigel Olsson who still play with Elton, bassist Dee Murray (who died in 1992) along with longtime lyricist Bernie Taupin and production by Elton main guy in the 70’s Gus Dudgeon who died in 2002

We will have more from our conversation with Ian Beck next week. He’s been incredible prolific in his life. He did ads for lots of artists including Ry Cooder, Richie Havens and a David Bowie pic for the cover of Cream Magazine. He was also a successful author. We’ll talk about that later in this three part series. – by John Beaudin