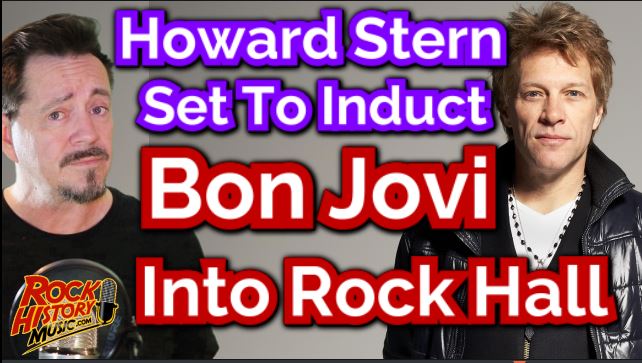 Jon Bon Jovi was on the Howard Stern show this morning when he asked the veteran broadcaster for the favor to which Stern replied, “I am so honored that you asked me, I am thrilled to do it.”

Bon Jovi was on The Late Show With Stephen Colbert last night, and said the induction was “truly does mean a lot. We had been looked over a couple times, and it’s really an honor to consider your being in the same building as the greatest of the greats, whether it’s Elvis or the Beatles or the Stones. Just the idea that the music that you made has been known to generations of people makes you feel good.”

Every year fans hope for good reunions and this year is no exception with original Bon Jovi guitarist Richie Sambora, who left the band in 2013, set to join the boys on stage at the ceremony in April, Sambora said, “It’s the Rock and Roll Hall of Fame — it’ll be a joyous occasion, I was there for 31 years and we sold 150 million records or something and we put a lot of asses in seats in stadiums around the world and made a lot of people happy. I did so many different jobs in that band, so, yeah, I’m showing up for that. Everybody should have a smile on their face and a smile in their hearts and it should be a celebration of what we did.”

Longtime Bon Jovi bassist Hugh McDonald (who has been with them since 1994 but not an official member since last year) will also be part of the induction on April 14 in Cleveland. Initially he was not set to be inducted with the band but after some review the Rock hall put him on the list as well as Denny Laine for his early work with the Moody Blues.

The Rock and Roll Hall of Fame Class of 2018 also includes the Cars, Dire Straits, Moody Blues, Nina Simone and the Award for Early Influence will go to Sister Rosetta Tharpe. – by John Beaudin