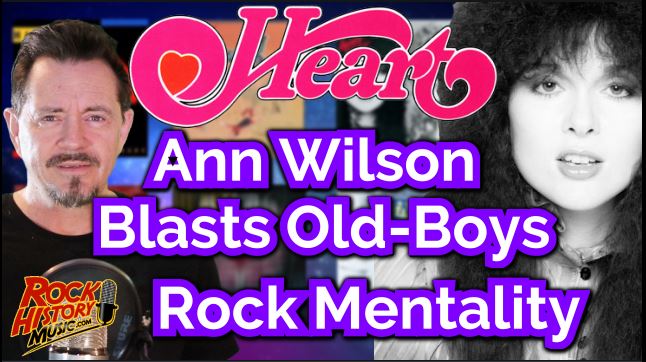 There’s a candid new interview in Rolling Stone magazine where the singer is breaking down the barriers about being harassed by men throughout her career. First she talks about the inspirations behind one of their most memorable hits ‘Barracuda.’ Most fans already know that it started in 1977 when their first record company Mushroom attempted publicity stunt branding the sister as more than just sisters, It was truly in bad taste. One night after opening for the kinks in Detroit a record promoter comes backstage asking to meet Ann’s lover ..her sister Nancy. Ann says she thought of calling the song “Lizard” of “Snake” but “Barracuda” just had a wickedness that I thought sounded good. It had rhythm and, in the end, that famous galloping guitar riff. Needless to say the band left Mushroom records.

Ann says she was scared to talk about the sexism problem in the 70’s in fear of being branded difficult. She warns the artist who are thinking dressing and acting sexy is empowering saying, “Well, I think young women just coming into their power can mistake their sexual power for their actual power. I think that idea of “because I’m sexy, I’m a feminist” is kind of immature. But as long as women think being sexy is what makes them beautiful and powerful … then it will continue.”

As for the eighties and the band being on MTV all the time with the tight costumes and big hair? Ann says it all made her extremely uncomfortable in he own skin. In the 70’s Heart was a rock band, in the 80’s they did pop/rock with a lot of image. It was also the period where they scored their only U.S. #1 album with the self-titled from 1985 which had 4-top 10 hits, “What About Love,””Never,””These Dreams” which went to #1 and “Nothin’ At All.” The follow-up “Bad Animals” had three hits including another #1 “Alone.” During those big-hair days Ann says sometimes people were seeing the work of the stylists more than the groups.

Other things that she had problems with in the 80’s? Robert Palmer videos with identical models and those Van Halen videos and that certain time they were with another big hair band, “I think we were on the Ratt tour and the lead singer came up to me and planted this big sloppy one on the side of my face and Nancy pulled him off me.”

As for some of those infamous stories of Led Zeppelin and their groupies, Ann says, (It’s a) “perfect example of rock stars feeling that, because they’re onstage every night, they’re kings of the world and the women afterward are subhuman.” – by John Beaudin

CHECK OUT THE INTERVIEW HERE https://www.rollingstone.com/music/features/hearts-ann-wilson-on-sexism-in-rock-trump-taylor-swift-w512402