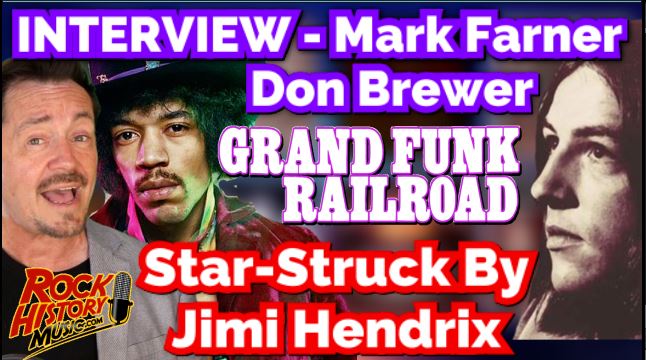 This is part 5 of our 12 part series on Grand Funk featuring both drummer/vocalist Don Brewer and original singer/guitarist Mark Farner who has been out of the band since the late 90’s.

If you know our channel you will know that we talk to many artists. We don’t just talk about them, we interview them. One of my favorite questions is, “were you ever star-struck by anyone?” and/or “did you ever really gel with another artists from a separate band?(Clip MF018)

I asked original and current drummer for Grand Funk Railroad Don Brewer the same questions – did you gel with any particular acts when touring? (Clip DB007)

Everyone reacts to fame in a different way. I remember going to a party at this rock stars house and a friend told me to look under the sink in the bathroom. My first reaction was, “no way.” I hate snooping through people’s stuff.” Anyway I was convinced to do it and and on opening the drawer I saw 4-5-6 gold or platinum albums. The rocker who owned the house hid them. I would not do that but I always ask artist what they do with their awards and gold or platinum albums. Mark Farner… (Clip MF020)