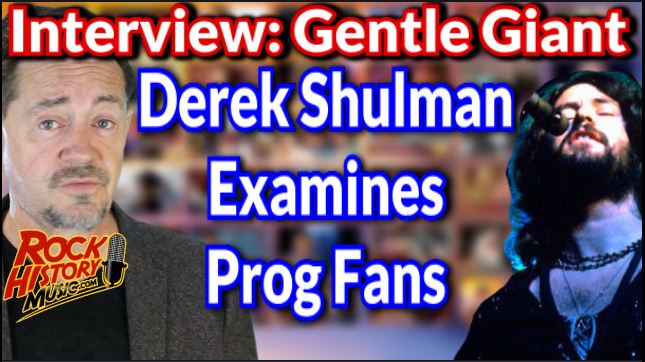 Prog fans don’t like the music they play, they devour it. There’s nothing fair-weather about a true Prog fan. I remember playing some early Genesis on a radio show I was syndicating in the mid-80’s only to receive an angry letter from a fan saying I mentioned Phil Collins more often than his predecessor Peter Gabriel and while I was at it stop playing anything from Yes’ “90125” and that Gentle Giant was miles a head of both of them. Prog fans seem to take it to heart more maybe – the passion is certainly there I should know I’m one of them. I asked Derek Shulman if he felt that kind of passion from the fans. (Clip 27)

Gentle Giant won the Lifetime Achievement Award in 2015 at Prog Awards. We chatted about that? (Clip 28)

Gentle Giant’s “Three Piece Suite” a compilation of their first three albums,their 1970 self titled debut, “Acquiring The Taste” from the following year and 1972’s “Three Friends.” It also features “Freedom’s Child” a tune that’s been in the vaults since the early 70’s. I asked Derek Shulman something I’ve asked everyone I’ve ever interviewed and it seems especially topical with the release of “Three Piece Suite.” Knowing what you know now what advice would you whisper in your younger 23-year-old self recording that first Gentle Giant album?

“Three Piece Suite” is available now. Check out the links in the description of this video. By John Beaudin