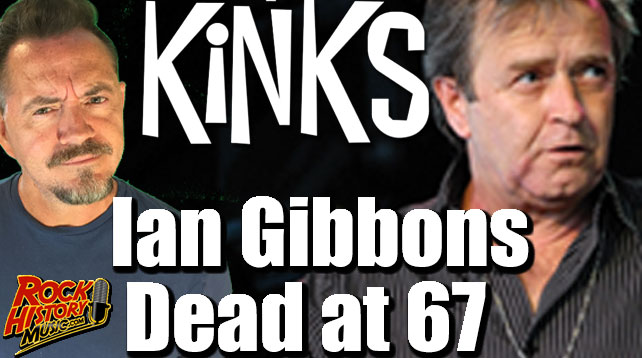 Former Kinks Keyboardist Ian Gibbons Dead at 67
August 2, 2019 – He was there for the Kinks 1980’s period (he technically joined in 1979) via hits like “Destroyer” from 1981, “Come Dancing” from 1982, “Don’t Forget to Dance” and “State of Confusion” the following year
Kinks lead man Ray Davies said in a statement, “To simply say Ian will be missed would be an understatement, when he auditioned for the band, he only played a few chords before I knew he was the right guy to have on keyboard, he seemed to know the right voicing to musically slot in between the other members of the band. And with the Kinks, that took some doing!”
Gibbons left the kinks in 1989 and had another incarnation with them in 1993.
Dave Davies also released a statement saying, “Apart from being a great professional, Ian always had a positive attitude to being on the road and recording. In the many years he worked with the Kinks, he added great color and dimension to the Kinks’ music and he was a good friend. I’ll miss him greatly. Lots of love his family and friends at this difficult time.”
The keyboardist was part of a Kinks off-shoot band called Kast Off Kinks and their statement read, “It is with great sadness that we have to report the sudden death of Ian Gibbons. Deepest sympathy to Nadia and all Ian’s friends and family.”
He also played with Sweet, Suzi Quatro, and Ian Hunter. No cause of death has been released so far. – by John Beaudin