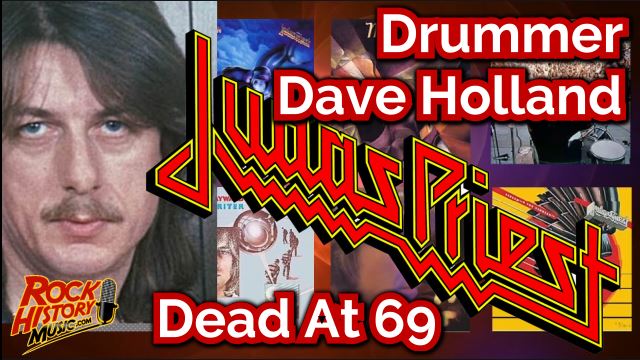 He was there for some big albums for Judas Priest starting with their seventh studio album and highest charting in the UK “British Steel” from 1980 featuring the hit “Living After Midnight” and “Breaking the Law”. The album peaked at #4. Then there was “Point of Entry’ in the following year “Screaming for Vengeance” in 1982 (which went double platinum in the U.S and feature the Top 10 hit “You’ve Got Another Thing Comin'”, “Defenders of the Faith” from 1984, then “Turbo” two years later and “Ram it Down” in 1988. He was the drummer on tunes like “United,” Heading out to the Highway.” Electric Eye””Freewheel Burning,””Some Head are Gonna Roll’ among others.

He kept a low profile the last few years. In 2004 he was sentenced to 8 years in prison for indecent assaults against a 17-year-old student of his with learning disabilities. Through it all he maintained his innocence.

Holland was a founding member of the Rock band Trapeze with Glenn Hughes. He also appeared on two solo albums from Moody Blues’ Justin Hayward and a solo album by Black Sabbath’s guitarist Tony Iommi but after Holland’s trouble with the law his drum parts were replaced.

The drummer died on January 16th. – by John Beaudin