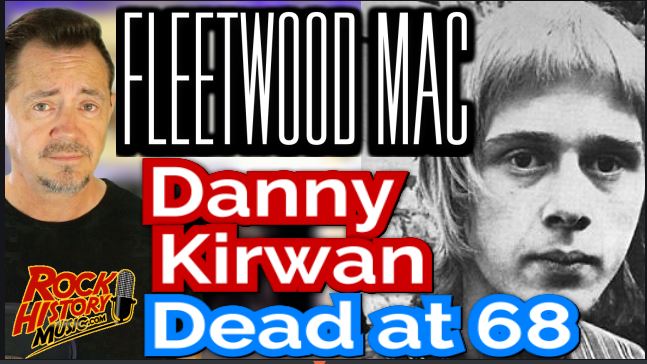 Mick Fleetwood released the following statement on his Facebook page, “Today was greeted by the sad news of the passing of Danny Kirwan in London, England. Danny was a huge force in our early years. His love for the Blues led him to being asked to join Fleetwood Mac in 1968, where he made his musical home for many years, Danny’s true legacy, in my mind, will forever live on in the music he wrote and played so beautifully as a part of the foundation of Fleetwood Mac, that has now endured for over fifty years. Thank you, Danny Kirwan. You will forever be missed!”

He played on their only British #1 song – the instrumental ‘Albatross’ as well as the hits ‘Man of the World’ and a real signature song for the early blues Fleetwood Mac sound ‘Oh Well.’ He was also on ‘Rattlesnake Shake.’

He was born on May 13, 1950 in Brixton, South London. Kirwin was in his teens when he was spotted by Fleetwood Mac.

The late Bob Welch of Fleetwood Mac who committed suicide in 2012 and who had the solo hits ‘Sentimental Lady’ and ‘Ebony Eye’ had a sometimes strained relationship with Kirwan once said, “He was a talented, gifted musician, almost equal to Pete Green in his beautiful guitar playing and faultless string bends.” In another interview he said, “Danny wasn’t a very lighthearted person, to say the least. He probably shouldn’t have been drinking as much as he did, even at his young age… He was always very intense about his work, as I was, but he didn’t seem to ever be able to distance himself from it… and laugh about it. Danny was the definition of ‘deadly serious’.”

He had problems with alcoholism and mental illness. At one point he was homeless. It was his drinking that got him kicked out of Fleetwood Mac.

Rolling Stone magazine printed a quote from The Independent from a rare interview with Kirwan from 1993. It was after Mick fleetwood went looking for his old bandmate going as far as asking the missing Person Bureau to look for him. At that time Kirwin said, “I get by and I suppose I am homeless, but then I’ve never really had a home since our early days on tour. I couldn’t handle it all mentally and I had to get out. I can’t settle.”

When Fleetwood Mac was inducted into the Rock and Roll Hall of Fame in 1998 his name was up there as well but he did not attend.

Kirwan died yesterday June 8, 2018. No cause of death was announced. – by John Beaudin