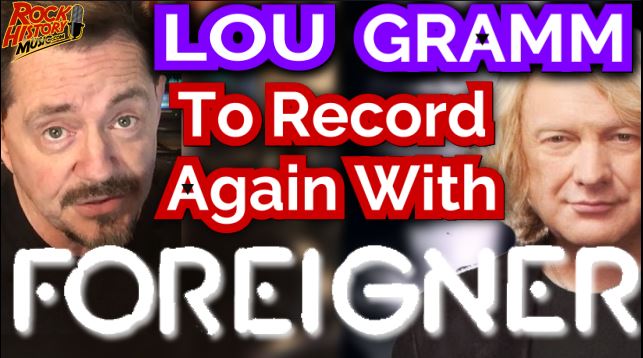 We got a taste of a reunion last year when the band got back on the stage with some former members including Gramm. Now Mick Jones says he has 10-12 unreleased tracks that he’d like the singer to record. The guitarist told Ultimate Classic Rock, “I don’t quite know when we’re going to have a chance to do that, but it wouldn’t be before the fall. I’m aware that they’re there, but I think we have to concentrate on one thing at a time. You know, otherwise the projects … it’s not good to be thinking of three or four different things at once.”

It get’s better, Jones says there will be more reunions on stage this year with former members including Gramm. It’s also pretty cool when old and new bandmates get along. For instances current foreigner singer Kelly Hansen and Gramm hit it off quite well. Jones says, “Kelly and Lou Gramm hit it off like a house on fire. They love it. I was holding my breath for a minute there, because in other conditions, it could be a touchy subject. But it hasn’t been at all — it’s been the opposite.” In fact some of the current band members were calling the amalgamation of the old the new crew “Super-Foreigner.”

Some of the reunion shows were filmed and they’ll get a DVD release either this or next year. Before that the group will release a new live recording, “Foreigner With the 21st Century Symphony Orchestra” on April 18th both on CD and DVD. They also plan to do a few orchestral dates following the release of the project. – by John Beaudin

Check out the interview at Ultimate classic Rock http://ultimateclassicrock.com/mick-jones-foreigner-interview-2018/