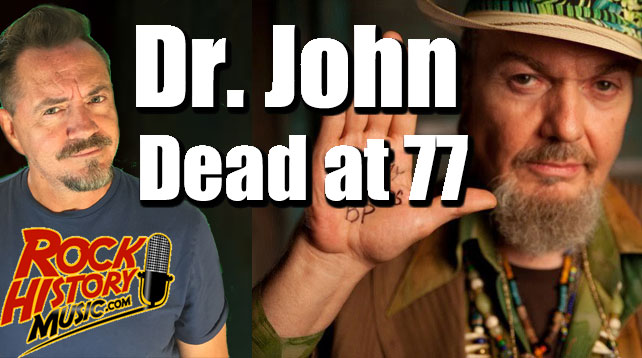 He was born New Orleans and his moved covered much ground as he grew up Jazz, R&B, Rock and Roll, Blues, funk mixed in with a little voodoo mystical spiritualism. His grandfather introduced the future pianist to music. He wasn’t much for school in those days Dr John got his chops directly from watching at the clubs which resulted in him getting kicked out of high school. He chooses to hang out with Professor Longhair instead. Back then he had switched from Piano to guitar but that soon would change.

He recorded his first album in 1968 and many years later made the Top 500 Greatest Albums of all Time from Rolling Stone Magazine. We should mention his classic, “Dr. John’s Gumbo,” from 1972 which featured covers of New Orleans standards also made the Rolling Stone Top 500. The following year he had the Top 20 hit “Right Place Wrong Time.”

In all, he won six Grammy Awards and was inducted into the Rock and Roll Hall of Fame by John Mayer in 2011.

Through the years he worked with the Band at their final concert “The Last Waltz. He collaborated with the Stones, Neil Diamond, James Taylor and Carly Simon, Lou Reed, Leon Redbone, Van Morrison, Christina Aguilera, B.B. King, Ringo Starr, and The Black Keys among others.

He had a way of mixing blues, pop, jazz, boogie-woogie and rock and roll like no other. – by John Beaudin