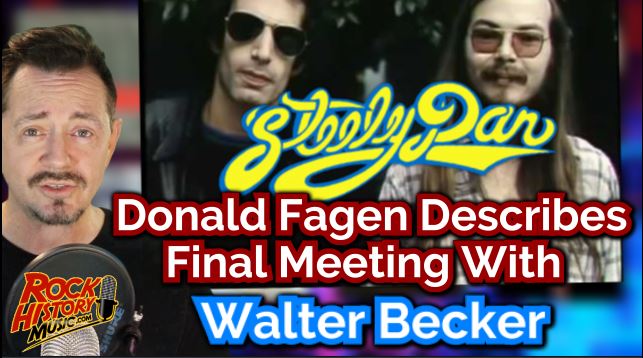 Losing a long time band-mate can be as painful as saying goodbye to ones spouse. There’s always much history there, trust, understanding, discovery etc.

Donald Fagen opened up to Rolling Stone magazine about his last meeting with his, then, very sick band-mate Walter Becker who we lost on September 3rd of this year (2017). He said as soon as he walked into Becker’s New York apartment he knew the guitarist was struggling adding, “When I put a chair next to the bed, he grabbed my hand. It was something he had never done ever before. And we had a great talk and, you know, he was listening to hard bop – his wife had put on Dexter Gordon records. He was very weak but he was still very funny. I’m really glad I had those hours.”

Fagen says he wasn’t interested in calling the post-Becker band Steely Dan. His choice was Donald Fagen and the Steely Dan Band but the promoters insisted calling it Steely Dan for obvious commercial reasons. Fagen also said that Becker was not interested in recording a follow up to 2003’s “Everything Must Go.” Saying that from 2011 when Becker was really feeling it everything changed in his personality – he didn’t have energy.

Lastly that lawsuit against Becker’s estate on the Steely Dan control. Fagen clarity’s, “Decades ago,” he says, “when we started the band, Walter and I had a contract, and it was really a simple thing that a lot of bands have – if someone resigns or is fired or dies, they sell their rock & roll stock back to the company. So we signed this thing and it ended up being that Walter and I were the remaining partners…50/50 partners, and the idea was that if somebody dies the other guy would essentially run the band and take control of the band, so we’re just trying to defend that contract.”