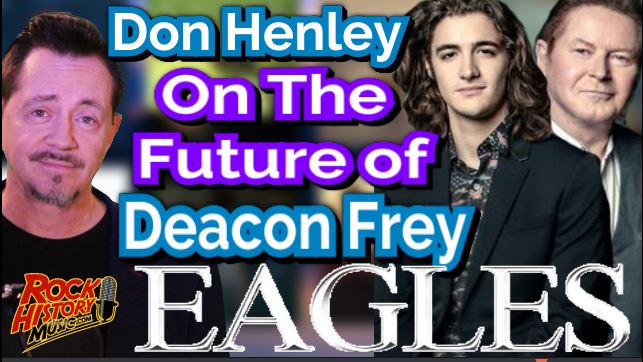 Could the Eagles have continued without the help of Deacon Frey? No according to Henley. The singer/drummer told Rolling Stone magazine they needed “family blood’ to keep the Eagles’ spirit alive.

So is there a specific time on how long Deacon will be in the Eagles? Henley said, the “wonderful part of it and the sadness that goes with it. I’ve told him that he doesn’t need to feel obligated to do this indefinitely. If he wants to start his own band and write his own music, he should do that. He can do this as long as we all agree that we want to do it. He may want to carve out his own future, and that’s just fine.” As many have pointed out, not that Eagles need any more fans, Deacon is sure to bring even younger fans to their shows. It’s extraordinary what that young man has done. I saw him sing “Peaceful Easy Feeling” at his father’s memorial service. As difficult as that might have been, he was so brave and composed. I’m sure, on the inside, he was churning. After a few months went by, I thought, “Why not see if he would like to be in the band?”

As for advice Henley and Joe Walsh told him to keep his eye on the work. Not to over-think any of their shows.

On that other new kid in town, Vince Gill Henley said, “It was a no-brainier for us to get Vince. Nobody else, other than Deacon, was even discussed. Glenn played golf with him. And Vince was in a band called Pure Prairie League. They did a style of music similar to ours – country-influenced pop. He fit like a glove. And his personality is great. He’s just glad to be there. He’s probably the happiest guy onstage.”

The Eagles are celebrating the 40th anniversary of their biggest album “Hotel California” by releasing a remastered repackaged edition. – by John Beaudin