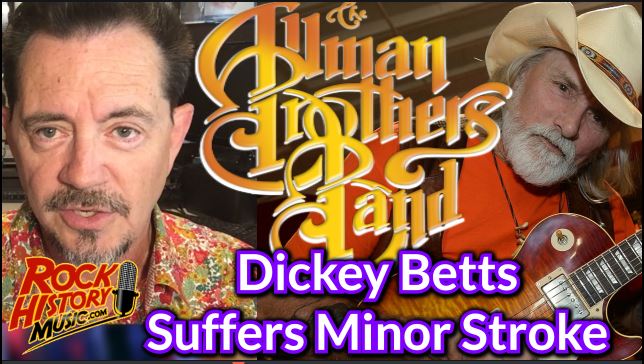 The good news is he’s Ok. Dickey Betts of the Allman Brothers suffered mild stroke. What does that mean? Well, his doctors ordered him to stay off the road for over a month.

The 74-year-old guitarist had to cancel his tour via doctors orders. They are calling it “post-stroke repercussions.” Betts was describing what had happened and what he was felling to his doctor and it looked like he had a minor stroke and he needed to take 3-5 weeks off.

Hi manager David Spero said, “Dickey really regrets that he can’t be there for his fans, but he has to take care of his health first.”

We’re glad he’s ok. The Allman Brothers Band has lost many members Duane Allman was the first in a 1971 motorcycle accident, his brother Gregg just passed last year as well as drummer Butch Trucks, Berry Oakley in 1972, Lamar Williams in 1983, Dan Toler in 2013, David Toler in 2011 and Allen Woody in 2000. Of the six players on their 1969 debut album only Dickey Betts and drummer Jaimoe Johanson are still alive.

Betts had actually retired but he got bored. I heard an interview with Dickey where he talks about changing the direction of his guitar playing through Chuck Berry and then BB King and then he wanted to know who influenced BB so he found Blind Lemon Jefferson and Django Reinhardt. The latter was a huge influence.

Dates for his upcoming shows will be re-scheduled. – by John Beaudin