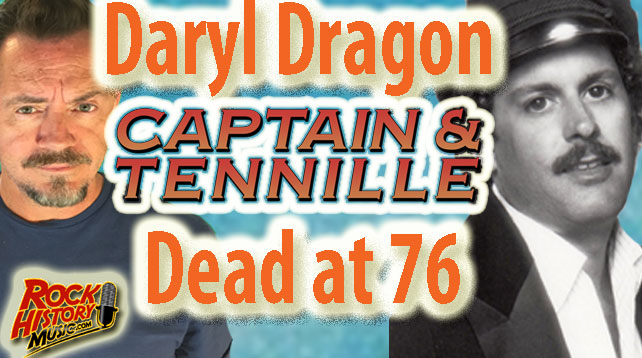 Dragon Of Captain & Tennille Dead At 76 – Our Tribute

January, 3, 2019 – He died of renal failure in Prescott, Arizona today with his other half of the Captain & Tennille, Toni Tennille, by his side. They met in 1971 after Toni hired him to play piano for a musical called “Mother Earth.” They married in 1975, separated in 2013 and divorced the following year.

The Captain & Tenille had the biggest song of 1975 with the title tune from their debut album, “Love Will Keep Us Together” written by Neil Sedaka and Howard Greenfield. The tune went gold and won the Grammy for ‘Record of the Year,’ in 1976.

The band would have 9 Top 40 hits including seven of them hit the Top 10 like, “Lonely Nights (Angel Face),” also written by Neil Sedaka, “Shop Around,””Muskrat Love,””You Never Done it Like That,” and their other #1 song “Do That To Me One More Time.”

Toni Tennille said in a statement, “He was a brilliant musician with many friends who loved him greatly, I was at my most creative in my life when I was with him.”

Dragon was a classically trained pianist. He was also a backing musician for the Beach Boys in the 60’s.

The duo also had a variety show on ABC for one season. It was canceled in 1977. – by John Beaudin