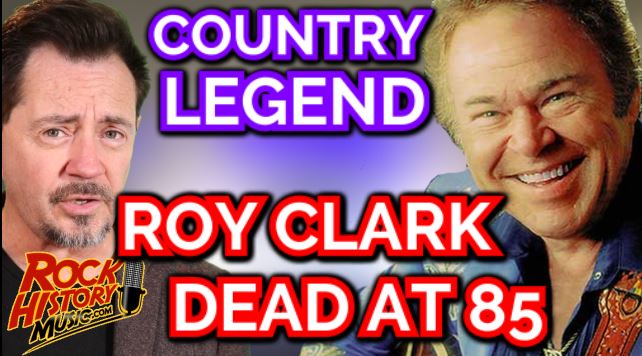 A legend in Country music has passed. Roy Clark was 85-years-old. Clark was a mainstay in the genre and on television in the 60’s, 70’s and 80’s.

I was a rocker in the seventies but I loved Roy Clark. Just watching him on Hee Haw he came off as someones favorite uncle – that guy you could talk to. His talent was immense Clark was a world class guitar player, an amazing singer who had In all Clark released almost 40 studio albums, not including 9 live albums and 68 singles. His country hits included “Through the Eyes of a Fool” the following year and “When the Wind Blows in Chicago” in 1965. His top 10 country hits included “The Tips of My Fingers” from 1963, “Yesterday When I Was Young” in 1969, 1970’s “I Never Picked Cotton” and “Thank God and Greyhound”, two years later he had “The Lawrence Welk – Hee Haw Counter-Revolution Polka” then his only #1 “Come Live with Me” in 1973 that same year he peaked at #2 with “Somewhere Between Love and Tomorrow,” a few months later he reached #4 with “Honeymoon Feelin'” and in 1976 “If I Had It to Do All Over Again”

He was a multi-instrumentalist who could put down his guitar and tackle banjo, fiddle, mandolin, harmonica among other instruments.

He was also famous as the host of Hee Haw for its entire 24-year run with Buck Owens sometimes co-hosting with him. In 2004 when the series was released on VHS and DVD he said “‘Hee Haw’ won’t go away. It brings a smile to too many faces.” Owens who left Hee Haw in 1986, had a different take on the show calling it “cartoon donkey.” He said he did it for “that big paycheck.” Clark on the other hand said the show was like a family reunion adding, “We became a part of the family. The viewers were sort of part owners of the show. They identified with these clowns, and we had good music.”He was also a guest host on the Tonight show in the 60’s and 70’s.

Clark was inducted in the Country Music Hall of Fame in 2009. He was also one of the first artist to open his own theater in Branson, Missouri.

Clark was born in Virginia and got his first guitar at Christmas when he was 15 within a year he was playing in his father band.

Publicist Jeremy Westby said Clark died Thursday due to complications from pneumonia at home in Tulsa, Okla. – by John Beaudin