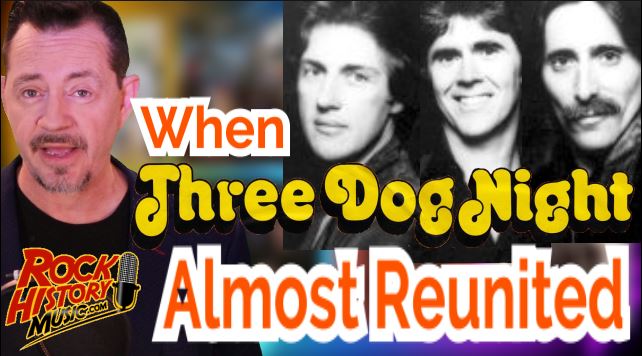 Was There Ever a Chance of a Real Three Dog Night Reunion? Chuck Negron Explains Everybody loves a great reunion. In Rock and Roll there are so many missed chances for band members to bury the hatchet, join hands and sing kumbaya down the yellow brick road but we all know that’s a hard task and a hard pill to swallow for rockers who sometimes hate each other. Sure their music was great but their relationships? Not so much.

Three Do Night broke up in 1975 after garnering 21 Top 40 hits. Cory Wells sang lead on 8, Chuck Negron on 7 and Danny Hutton on only 2. The group shared vocals on 4 of their hits. Negron sang some of their biggest hits like, “ Just an Old Fashioned Love Song,” “The Show Music Go On,””One” and their biggest “Joy To The World.” By the time broke up he was dealing with a serious addiction to drugs and he didn’t come clean until 1991.

Negron rejoined the group in the early eighties but was gone again 1985 – he hasn’t been back since. Fans however were always wishing for a reunion with the three main singer but with Cory Wells passing in 2015 that dream has died. I asked Negron when was the last time the band came close to a reunion? (9B)

From talking to Negron it’s clear that he and Danny Hutton are not close and haven’t been for a long time, even going back to their first hit “One” in 1969. CLIP 10

The 4th Edition of Chuck Negron’s popular book “Three Dog Nightmare,” including 11 never before published chapters is available at ChuckNegron.com. All copies are signed by Chuck. – by John Beaudin