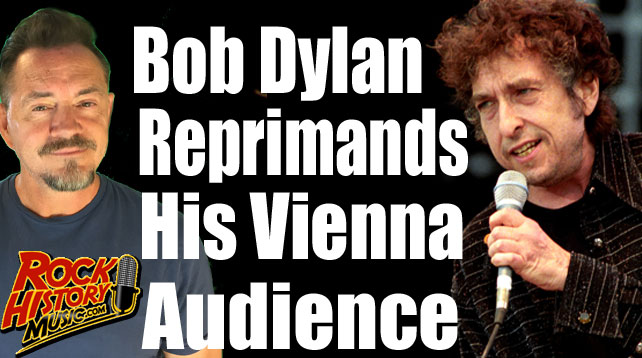 Bob Dylan Reprimands The Audience at a Show In Vienna
April 17, 2019 – The “no photo” thing at concerts has been becoming a thing for quite a while now. I was at a Heart concert 4-5 years ago and when taking a video the shortest/oldest woman I’ve ever seen wearing a security guard uniform gave me the warning. She even called me “slick.” To which I replied, “why to thank you.”

Bob Dylan has been warning his crowds for years now not to take pictures but at his last show in Vienna he stopped the show. He was playing “Blowin’ in the Wind” and after one verse he did something he rarely does – he spoke! He never talks at his shows anymore. Dylan said, “Take pictures or don’t take pictures,” he barked. “We can either play or we can pose. Okay?” The singer used to introduce the band at least but he stopped doing that two years ago. He does not talk.

At one point the musical legend tripped on a chord and almost fell on stage. He also left the show early leaving the band to play an instrumental out. – by John Beaudin