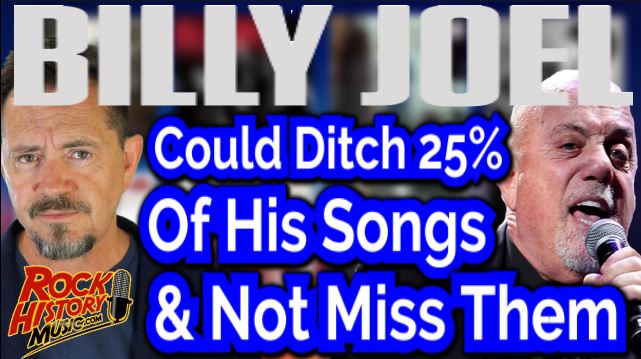 Anthony Mason from CBS Sunday Morning talked to the piano man about his 100th concert at Madison Square Garden. Every show was sold out adding up to 2 million tickets. Bruce Springsteen was the special guest on the 100th show this past week.

He says he remembers the first night he played there in 1978 – it was the pinnacle of his career to headline there.

Mason asked if some of the songs sound different to him now? Joel says “some of them age better than others. They’re like my kids, some of them grew up to be doctors and lawyers and Indian chiefs and some a couple of bums.’ Though he still does his breakout hit “Just the Way You Are” it’s one of his least favourite hits because it was written for his first ex-wife and it was a gift. He says when he showed it to her she said, “Does that mean I get the publishing too so it kind of took the shine off the thing.”

Mason once again asked him why he quit writing new music after “River of Dreams” in 1993. Joel said what he often said, “I couldn’t be as good as wanted to. It was driving me crazy. It was wrecking my personal life too, just not being able to be satisfied. Drinking became a problem because of that. You know to try to drown my frustration with it.” Mason then point out that Joel has written some great songs to which Joels says, “I could look at 25% of what I wrote and throw it out and not miss it at all. Mason counters with, “I bet you most artist would say the same thing.” to which Joel agrees and adds, “But that’s what drives food art.” Joel says he wanted a personal life and quotes the Neil Diamond line, “I’ve forgiven myself for not being Beethoven.” That resonated with him and he realized he’d not forgiven himself.

Billy Joel plans on continue his Madison Square Garden residency. He joked that he’ll probably continue doing it for his natural born life. – by John Beaudin