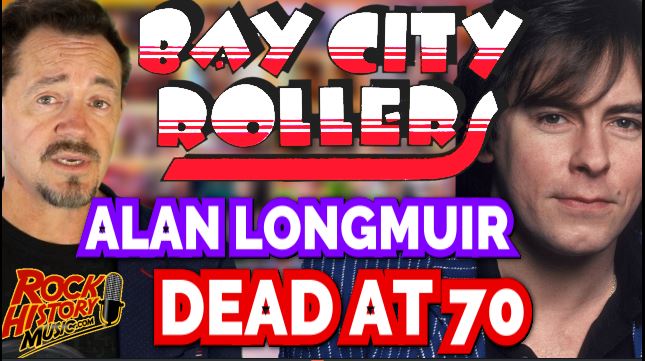 He was certainly part of a phenomenon in the 70’s. They were not exactly a rockers delight but it was hard to ignore Scotland’s Bay City Rollers in 1975-76 in North American and even earlier in the U.K.

As mentioned long before they came to North American the boys scored eight top 10 hits in the UK including ‘Keep on Dancing,’ ‘Remember (Sha-La-La-La),”Summerlove Sensation,”All of Me Loves All of You,’ Then there were two #1’s ‘Bye, Bye, Baby’ (which was featured in the film Love Actually in 2003) and ‘Give a Little Love’ followed by ‘Love Me Like I Love You.’

But 1974 the Bay City Rollers assembled their classic line up which included the Alan and Derek Longmuir, guitarists Eric Faulkner and Stuart Wood and lead vocalist Les McKeown.

Longmuir was born Edinburgh, Scotland on June 20, 1948. He actually left the Bay City Rollers at the height of their career in 1976 only to return in 1978. He reportedly contracted an illness while on vacation in Mexico.

Liam Rudden who wrote biographical stage play I Ran With the Gang in collaboration with Longmuir wrote, Alan was one of the most gentle, generous and kindhearted people I have ever known. He touched the lives of everyone he met with a smile that made them feel special, insisting that despite his amazing adventures in life he was still just ‘a plumber from Edinburgh.”

I was not part of “Rollermania” so I had no tartan’s in my closet but they were a force on the radio for a while.

The group sold an estimated 120 million records. There were many reunions throughout the years but Alan Longmuir said many times that there was too much work and not enough payback in doing the music. There were many arguments on where all the money went during the heyday of the band.

Singer Les McKeown, described his friend as “the original Bay City Roller” and bandmate Stuart Wood said he would “remember the good times we had for over 40 years”. – by John Beaudin