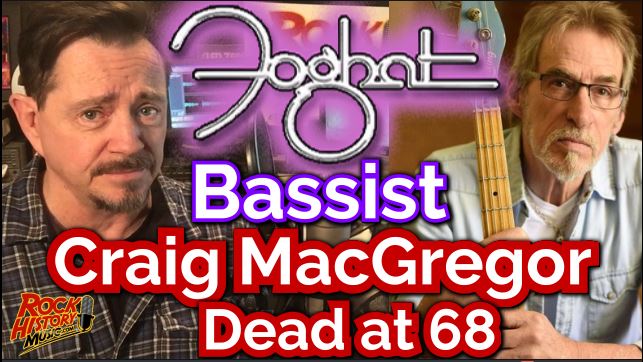 He joined the band in the mid 70’s when they were 5 years in. This one is a sad case. He was diagnosed with lung cancer in 2015 but it could have been detected much earlier. Three years earlier he went for a CAT scan after breaking a rib after a fall. They saw the tumor there but didn’t tell him about it. By the time he got treatment it was 60 times larger and inoperable and had spread to his brain. MacGregor then became an advocate for legislation for patients to have full access to their test results.

“On behalf of Craig MacGregor’s family and the Foghat family, it is with great sadness that we are letting you know that we have lost our brother, good friend, husband, father and bandmate this morning, He passed peacefully in his wife Lisa MacGregor’s arms after a prolonged battle with cancer. Please respect the privacy of the family and band members at this time. We will be sharing information in the next day or so. Rest in Peace, Thunderfingers.”

MacGregor did not play on their biggest hit “Slow Ride” from 1975’s “Fool For the City” – that was Nick Jameson but joined the band for it’s follow up “Night Shift” in 1976. He appeared on the hit tune “Drivin’ Wheel,” which peaked at #34 and “Third Time Lucky” which reached #23 on the Billboard chart.

He was born on Sept. 13, 1949 in Iowa, He started playing piano at 7, then took on the trumpet but said he wanted to be in front of the stage and that’s when he started on bass. He was in Foghat off and on through the years. He stayed for 6 years on his first go-around, then was back in 1984, then 1986 and from 2005 to present. In 2015 he had to stop touring with the band because of the effects of chemotherapy. – by John Beaudin