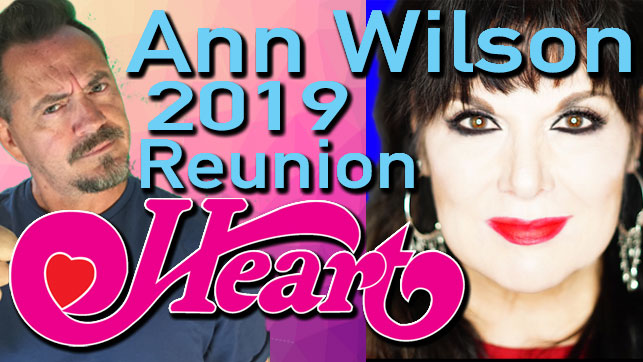 September 13, 2018 – Tomorrow Wilson will release her new album, “Immortal” tomorrow. The singer was on the Jim Kerr show of New York’s Q104.3. When asked about the future of Heart Ann said, “Just about everyone I’ve talked to today has asked me to comment on this rumour that there’s a HEART reunion next year, And I haven’t heard about that yet. But Nancy and I will be getting together soon to talk and see if we have any ideas on that. We will not ever be… I will never agree to going back out there in a mechanical, money-grab-type way; at this point in my life, I’m not gonna do that — I’m gonna make every minute count and make it real. So we’ll talk and we’ll figure out if we can figure out a fresh, new, cool way.”

She added: “HEART was conceived in an atmosphere of idealism, and that’s how it has to be reconceived now for me to be interested in doing it. So it’s possible.”

Ann’s husband Dean Welter was arrested during Heart’s 2016 tour for assaulting Nancy’s then 16-year-old twins. The boys has supposedly left Ann’s tour bus door open which worried her husband because he feared her dogs would get out. Welter didn’t face any jail time since he plead guilty to lesser assault charges.

Ann’s new album features renditions of Gerry Rafferty’s “Baker Street,” the Eagles “Life in the Fast Lane,” David Bowie’s “I’m Afraid of Americans” and “Back to Black” from Amy Winehouse. – by John Beaudin