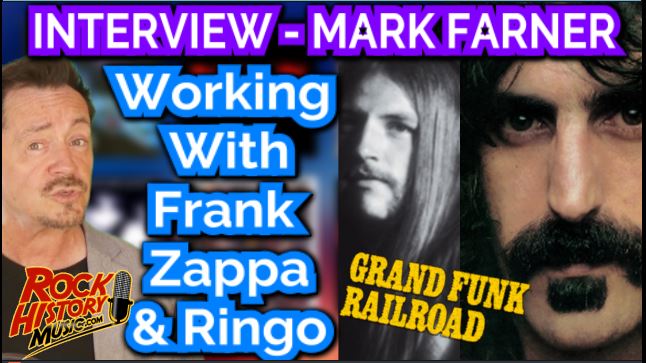 Grand Funk broke in 1976 after 11 studio albums. Their last, during that era was, “Good Singin’, Good Playin’.” They were looking for their 10th U.S. Top 40 hits but it would never be. The album was not a hit and the two singles “Can You Do It,” and “Just Couldn’t Wait” didn’t crack the charts.

The group had actually broken up before the album was release but word of Frank Zappa being behind the controls. That changed things. I asked Mark Farner about working with Zappa. (Clip MF016)

Another great experience was touring with Ringo Starr’s All Star Band in the mid-90’s with Randy Bachman, John Entwistle, Billy Preston, Starr’s son Zak Starkey and Felix Cavaliere of the Rascals. (Clip MF017)

So what’s happening with Mark Farner in the near future? (Clip MF019)

We will have more of our exclusive conversations with Don Brewer and Mark Farner next week. Hopefully one day they will play together again. Make sure you check out our merchandise store for Rock History Music sweatshirts, T-shirts, mugs and more and thanks for the support. Go to RockHistoryMusic.com or get the links in the description of this video. – by John Beaudin