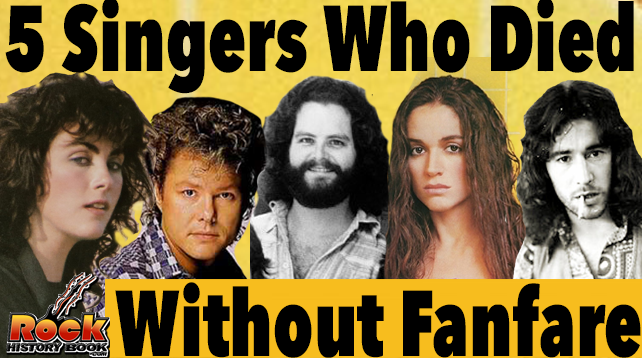 Laura Branigan, the Grammy-nominated pop singer, songwriter and actress best known for her 1982 platinum hit “Gloria,” died on August 26, 2004 at the age of 52 of a previously undiagnosed brain aneurysm in her sleep at her home in East Quogue, New York.

Branigan’s brother Mark said she had complained to a friend of a headache for about two weeks before she died but had not sought medical attention.

Branigan’s signature song, “Gloria” peaked at No. 2 on the U.S. pop chart. Her other hits include “Solitaire,” “How Am I supposed to Live Without You,” and “Self Control.”

Larry Hoppen, co-founder and lead vocalist of the pop-rock group Orleans, died on July 24, 2012 in Sanford, Florida at the age of 61.

Hoppen suffered from depression most of his life and his cause of death was later revealed as suicide, a fact later confirmed in Orleans founding member John Hall’s autobiography.

Dan Hartman, best known for singing the 1984 pop song “I Can Dream About You,” died at the age of 43 from an AIDS-related brain tumor on March 22, 1994 at his Westport, Connecticut home.

Hartman was diagnosed with HIV in the late 1980s but kept it a secret and did not seek treatment.

A singer, songwriter and multi-instrumentalist, Hartman played bass for the Edgar Winter Group and wrote and sang the band’s pop hit, “Free Ride,” in 1972.

Nicolette Larson, best known for her work with Neil Young and her 1978 hit single “Lotta Love,” died on December 16, 1997 in Los Angeles at age 45 of cerebral edema triggered by liver failure.

According to Astrid Young, her friend and Neil Young’s half-sister, Larson had been showing symptoms of depression, and her fatal seizure “was in no small way related to her chronic use of Valium and Tylenol PM.”

Larson also collaborated with and sang background vocals for the Doobie Brothers, Michael McDonald, Linda Ronstadt, Christopher Cross, and the Nitty Gritty Dirt Band, among others.

Hammond was taken to a doctor by his wife Tracey because he wasn’t feeling well. He died shortly thereafter.

Not an original member, Hammond joined ARS in 1972. Backing Hammond’s soulful and unique lead vocals, the group enjoyed a string of 1970s hits that include “So Into You,” “I’m Not Gonna Let It Bother Me Tonight,” “Imaginary Lover,” “Do It or Die,” and a remake of the Classics IV hit “Spooky.” – Written by Jason Klose

Jason Klose is an arts and entertainment writer based in Central Pennsylvania, with experience in print and online media. He has a particular interest in music and television history and is always looking for new and exciting projects. Jason has interviewed several prominent artists and personalities in the entertainment industry including: Linda Ronstadt, Barry Manilow, Tony Bennett, Charlie Daniels, Dennis DeYoung (Styx), Nancy Wilson (Heart), Lou Gramm (Foreigner), Amy Grant, Rosanne Cash, Clint Black, Sara Evans, Carrie Underwood, Bob Eubanks, and many more. Jason’s work can be found on his website: https://jasoncklose.contently.com/