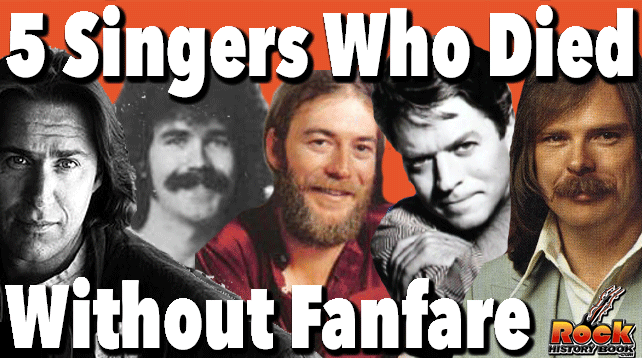 English singer-songwriter Robert Palmer, best known for his solo hits in the late 1970s and 1980s, died September 26, 2003, from a sudden heart attack in his hotel room in Paris, France at the age of 54. Born in Batley, Yorkshire, England, Palmer possessed a powerful, distinctive, gritty and soulful voice, combining soul, jazz, rock, pop, reggae and blues into hits like “Every Kinda People,” “Bad Case of Loving You (Doctor, Doctor),” “I Didn’t Mean to Turn You On,” the No. 1 hit “Addicted to Love,” and “Simply Irresistible.” Along with guitarist Andy Taylor and bassist John Taylor of Duran Duran and former Chic drummer Tony Thompson, Palmer helped form the Power Station, which released the Top 10 hit singles “Some Like It Hot” and a cover of the T. Rex song “Get It On (Bang a Gong)” in 1985.

Singer, songwriter, and multi-instrumentalist Dan Fogelberg, best known for his string of hit singles in the late ‘70s and early ‘80s, died December 16, 2007. The Peoria, Illinois native had been diagnosed with advanced prostate cancer in 2004. After undergoing therapy, his cancer went into partial remission; however, his cancer returned. He died at his home in Deer Isle, Maine at the age of 56. Fogelberg’s 1979 multi-platinum album Phoenix included his biggest hit “Longer,” which peaked at No. 2, and “Heart Hotels.” Released in 1981, his most successful album, the multi-platinum The Innocent Age, featured the hits “Same Old Lang Syne,” “Hard to Say,” “Leader of the Band,” and “Run for the Roses.” More hits followed with “Missing You,” “Make Love Stay,” and “The Language of Love.”

Singer, songwriter, and keyboardist Paul Davis, best known known for his radio hits and a solo career that encompassed soul, country and pop in the 1970s and ‘80s, died of a heart attack at the Rush Foundation Hospital in Meridian, Mississippi on April 22, 2008, a day after his 60th birthday. Born in Meridian, Mississippi, Davis had a string of hit songs from the late ‘70s to the early ‘80s, his most successful being 1977’s “I Go Crazy,” a No. 7 pop hit which once held the record for the longest chart run on the Billboard Hot 100. He followed that with several more hit singles: “Sweet Life,” “Do Right,” and 1982’s “Cool Night,” a No. 11 hit, and “‘65 Love Affair,” which was his highest-charting single at No. 6. In the mid-1980s, Davis had two country No. 1 hits as a guest vocalist on songs by Marie Osmond and Tanya Tucker.

Singer, songwriter, and musician Brad Delp, widely known as the lead vocalist of the rock bands Boston and RTZ, died on March 9, 2007. The Massachusetts native died by suicide by carbon monoxide poisoning at his home in Atkinson, New Hampshire at the age of 55. Even though the cause of death was ruled a suicide, the reason for it has been the subject of contradictory news reports and various lawsuits, including lingering hard feelings from Boston’s disbandment in the 1980s and personal tension between Delp and bandleader Tom Scholz. Delp’s “golden voice” with soaring vocals and range and all harmony parts can be heard on all of Boston’s classic rock staples of the 1970s, including “More Than a Feeling,” “Foreplay/Long Time,” “Peace of Mind,” “Smokin’,” “Don’t Look Back,” and “A Man I’ll Never Be.” In 1986, Delp sang lead on Boston’s No. 1 hit “Amanda,” off the band’s third album Third Stage, as well as “We’re Ready,” “Cool the Engines” and “Can’tcha Say (You Believe in Me)/Still in Love,” the band’s last Top 40 hit in the US.

Singer, songwriter, and musician Dan Seals, also known as England Dan of the 1970s soft rock duo England Dan & John Ford Coley, died on March 25, 2009. Seals had been diagnosed with mantle cell lymphoma; and despite radiation treatments and a stem cell transplant in 2008, he died at his daughter’s home in Nashville at the age of 61. The native Texan and Coley are best known for their 1976 single “I’d Really Love to See You Tonight,” a No. 2 hit on the Billboard Hot 100. They followed that with the hit singles “Nights are Forever Without You,” “It’s Sad to Belong,” “We’ll Never Have to Say Goodbye Again,” and “Love Is the Answer.” Seals later launched a successful country music career in the 1980s which produced 11 No. 1 country hits.