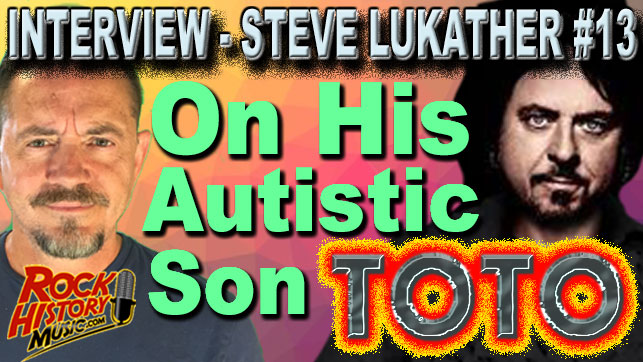 Autism is certainly not a rare word anymore. Everyone has been touched by this disease. Everyone knows at least one story. Toto’s Steve Lukather shared his own story. His son Bodhi has autism.

(Interview clip #13) Steve Lukather Opens Up About His Autistic Son

My wife and I have a 20-year-old autistic daughter named Danica. She was born in 1998 and long before the diagnoses we had already figured out that she was clearly autistic. Now everyone knows someone in the autistic spectrum. Even though the TV show The Big Bang Theory says that the main character Sheldon is not in the autistic spectrum the guy who plays him Jim Parson says the character exhibits some asperger-like characteristics. When I first interviewed Steve Lukather last year I had no idea that his son Bodhi was autistic.

That was just a small part of the interview since most of it was private and really just two dads talking about dealing with autism but not at all in a poor me kind-of-way. We did talk about them possibly being vulnerable in a world that might still not understand autism and bullying.

Toto have just released “40 Trips Around the Sun’ a remastered greatest hits with three unreleased tunes. The band’s 2018 ’40 Trips Around The Sun’ tour starts again in October. Go to totoofficial.com for details. – – by John Beaudin